VMware uses Pearson Vue for all of their certification exams. I have had several interactions with VMware’s certification personnel due to my participation in the VMware Beta exam process. I forwarded this blog post to Randy Becraft, Senior Program Manager, VMware Certification Team. After discussion with the Vue program manager assigned to VMware, Randy provided me with the following bullet points:

During my April encounter with Vue, I spoke with a customer service manager. I called him last week and left a voicemail asking for a call back.

The staff running @PearsonVue‘s Twitter account saw a flurry of retweets of this blog post. I received a DM this morning saying that I’d be contacted by one of the Vue staffers.

The customer service manager who got my voicemail just sent me an email. I did not explain my situation in the voicemail; I assume that the social media staff at Vue forwarded the Twitter activity to him. The email says:

I got your VM this morning.  Sorry I was in training last thursday and Friday and missed your call.

While it absolutely is policy to need some sort of documentation to waive the reschedule policy for a death in the family, I booked you for a new exam for end of November as a customer service gesture..  You can go online, call our call center or give me a call to reschedule to a date/time that works better for you.  I am very sorry for your loss.  Please let me know if you have any questions or if there is anything else I can do for you.

Although I’m pleased that the manager did what I believe to be the right thing, I have to think it’s primarily because of the bad publicity on Twitter.  Another victory for social media.

I failed my first attempt at the Cisco 640-916 DCICT exam by 4%. I studied in the evenings for a few weeks afterward, prepping for the retake. I worked a maintenance window for a client on the evening of October 23rd, finishing around 10PM. I was scheduled at the same client on the 24th, but that was a backup date in case the 23rd had problems. With no work left to do, I decided to book the exam for 1:30PM on the 24th. This would give me the morning to try cramming useless factoids into my brain.

I was unaware that as just as I was booking the exam, a family member was dying. It was a hospice situation; his passing was expected, but the speed with which it happened was not.

Then I called Pearson Vue. The cancellation policy requires 24 hour notice, an absurdity on its face because I booked the exam inside the cancellation window – 15 1/2 hours before the scheduled time. This policy means I couldn’t have cancelled the appointment ten seconds after making it. I booked it at an exam center with literally dozens of exam slots open – I didn’t take the final slot available on the 24th and prevent somebody else from testing on that day.

The Vue person demanded a death certificate. I won’t repeat exactly what I said in reply – I suppose the best way to put it is that I ‘impolitely declined’. Vue said there was nothing else that could be done and my exam fee would be forfeited. I hung up.

My wife and I planned to drive up to another family member’s house, which happened to be close to the testing center. At some point I began stewing over what had happened and decided if I forfeited the exam fee, Vue was somehow winning – beating me, stealing the exam fee. I can’t say the logic was sound, but that’s how my mind was operating at the time. I popped out and sat the exam for the second time. I failed by 10 points out of 1,000.

Since 2009, I have sat 21 exam sessions at Pearson Vue at a total cost of $5,000. I haven’t canceled any sessions, although I’ve had an exam canceled due to Vue’s gross incompetence. I think it’s reasonable to give me the benefit of the doubt that a family member did indeed pass away. I would think that even the questionably skilled techs at Vue could design a way to track same-day cancellations. It could be a single field on a form; one column in a database; even just an entry in the comment field. Perhaps Vue could consider dropping the policy altogether. Are there really that many people cancelling appointments on the same day? People spend countless hours preparing for these exams, I highly doubt that there is a flood of same-day cancellations other than true emergency situations.

I wish I could say that I was going to avoid a Vue testing center from now on, but that’s obviously not going to happen due to my career requirements.

This is what I get for taking beta exams. I understand. I create my own mess. But that doesn’t change the fact that Pearson Vue is spectacularly incompetent. I’ve previously blogged my strongly negative opinions of Pearson Vue and today’s experience doesn’t do much to improve my outlook.

I sat the [redacted] VMware beta exam today and there were problems with the remote environment. It took me almost 40 minutes to complete the first two questions because the performance of the environment was so lousy. Per my beta exam instructions, after about 15 minutes I asked the Vue proctor to contact VMware for assistance.

The proctor returned to say that we should reboot my local exam station, as if that had anything at all to do with the slow response from the remote lab. I asked her who told her to do that – she had called the Vue helpdesk, not VMware. I told her to call VMware, to which she replied “We can’t do that.”  By then the environment had improved from ‘lousy’ to ‘nearly tolerable’ so I gave up complaining.

After the exam I spoke with the VMware certification team and I received confirmation of the following:

The slow performance of the environment set me back too far to recover;  I was unable to complete the exam. Maybe it will cost me a passing grade, maybe it won’t, but Pearson Vue’s failure to rectify the situation is inexcusable. 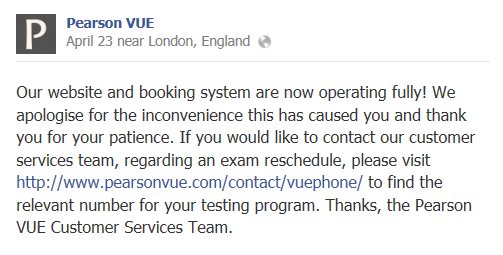 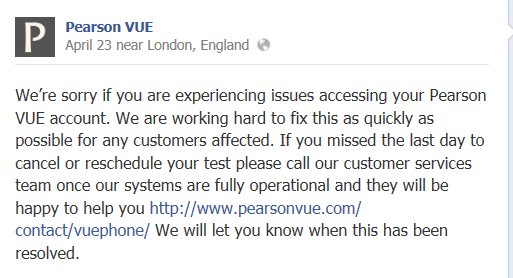 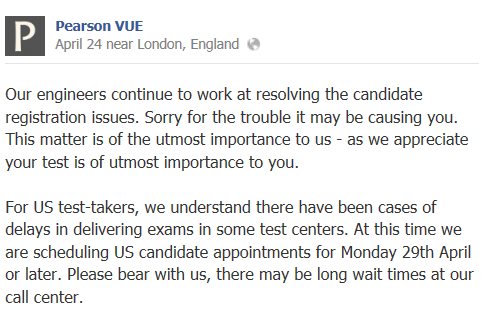 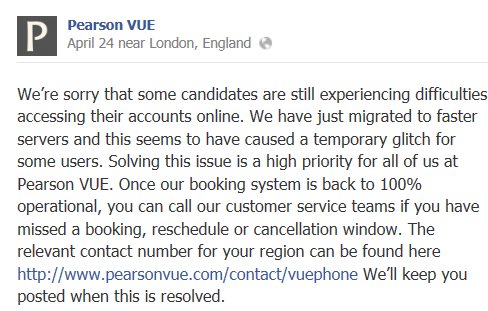 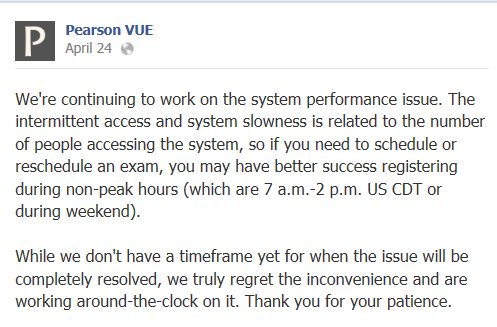 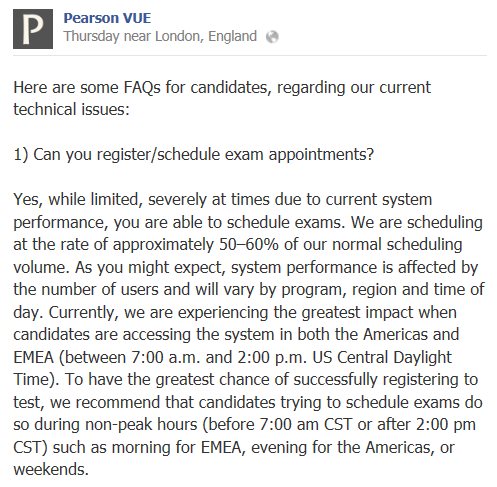 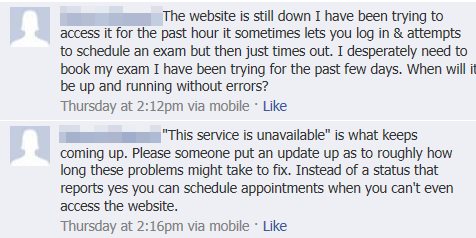 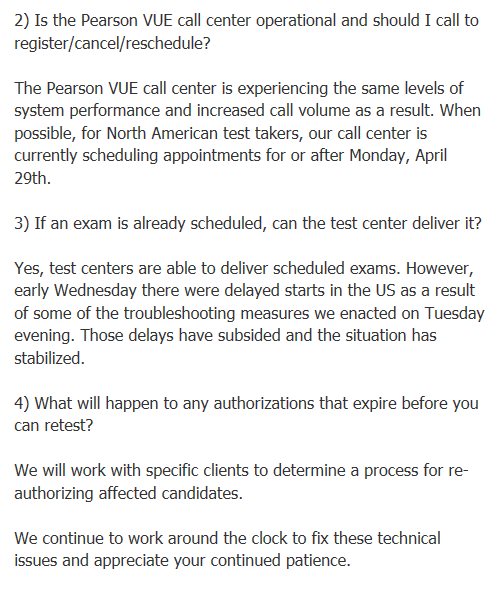 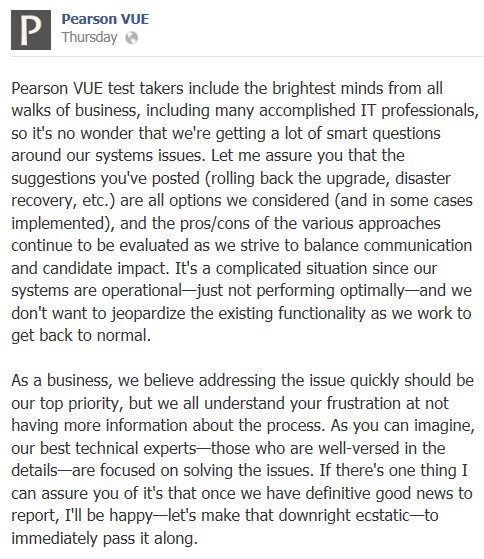 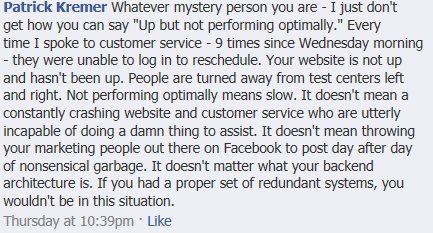 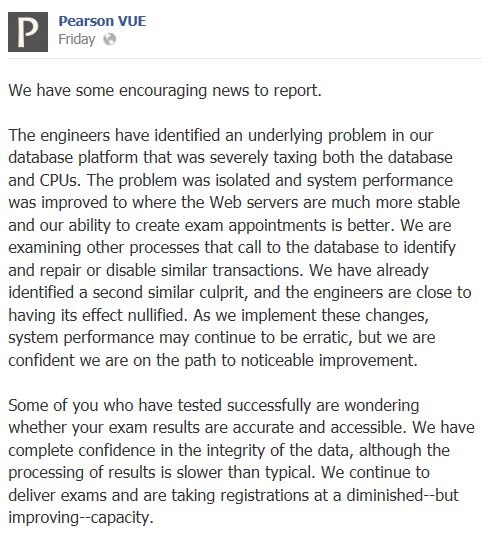 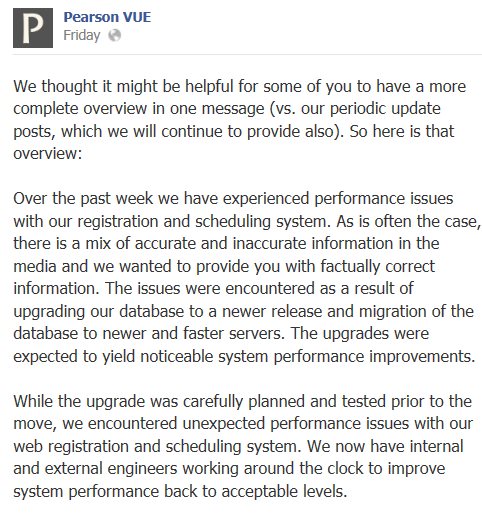 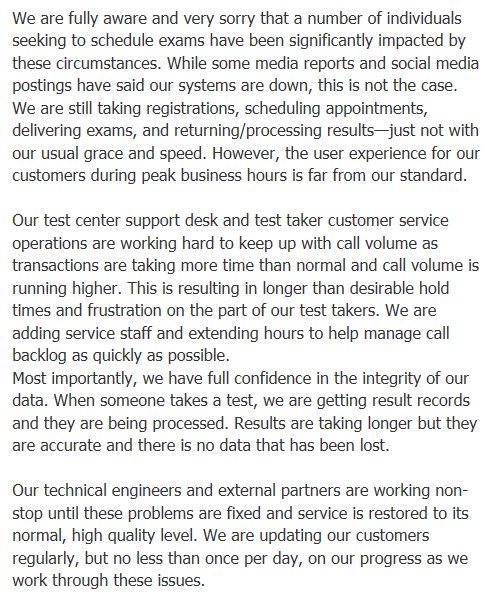 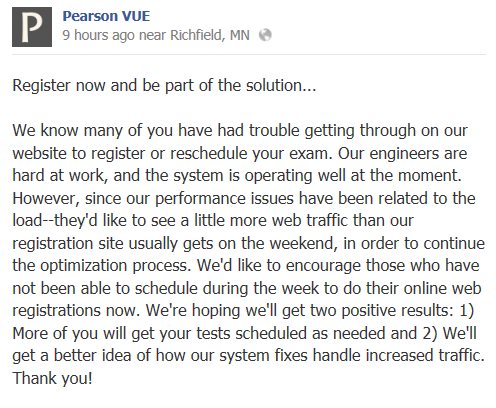