In Part VI of this series, we showed how to sync a fork of our VEBA repository to the upstream repository maintained by VMware.  Back in Part IV, we deployed our first sample function. In this post, we will deploy another sample function – the host maintenance function.

But first, we have a problem. Here is the stack.yml file for our python tagging function 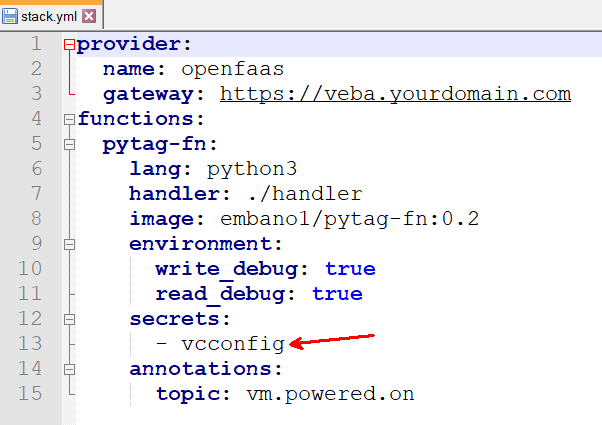 Here is the stack.yml for our host maintenance alarms function 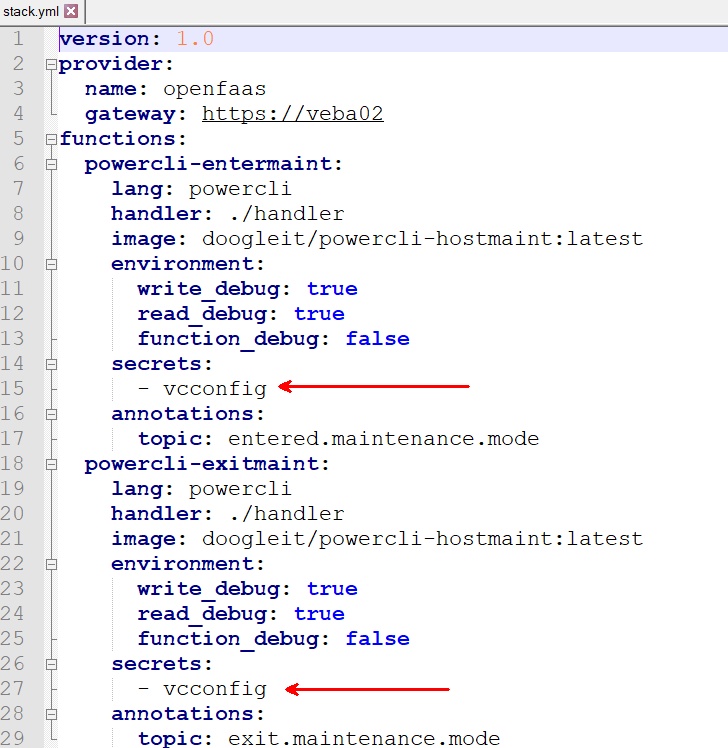 Do you see the problem? We have a secret named vcconfig used for both functions, but the secret files have a completely different configuration. Neither script can read the other’s secret because they weren’t programmed to do so. The TOML secret file is a configuration file format popular with Python. The PowerShell secret file is simple JSON.  This means that we will need to change the secrets file to a different name, one for the Python script and one for PowerShell. Note that it doesn’t have to be this way – there’s nothing stopping a script writer from using TOML format for PowerShell and JSON for Python – all that matters is how how the script is written. You could write your scripts to use a single secret format and they could all share a single secret.

We now need to change the sample script to point to a different secrets file. In order to do that, we need create a new secret using our vcconfig.json file.  The file looks like this:

After editing the file to point to our environment, we push it into the VEBA appliance. I name it ‘vcconfig-hostmaint’ but you can name it whatever you want. Remember you need to log in with faas-cli first, for a refresher look at Part IV of this series. 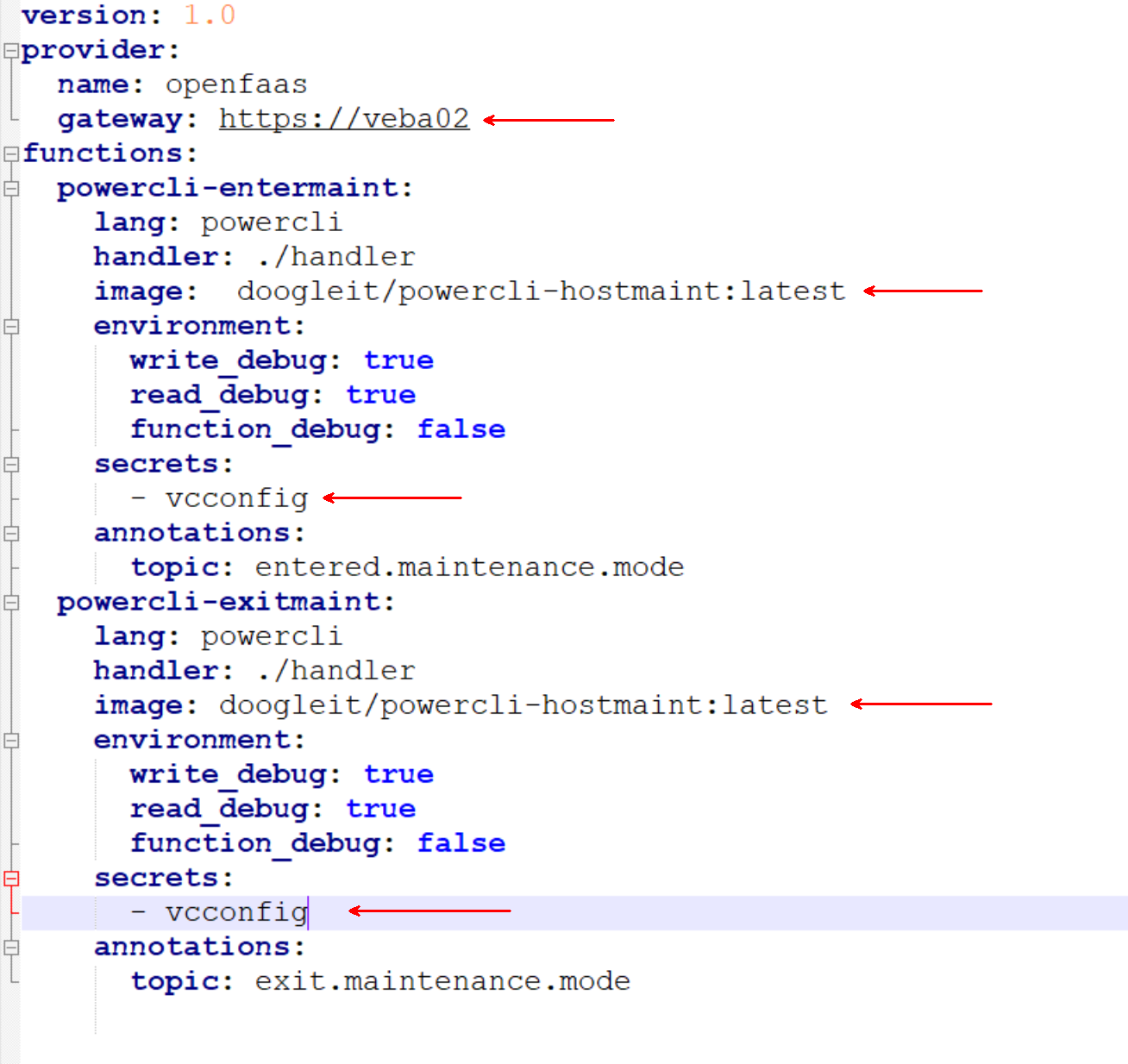 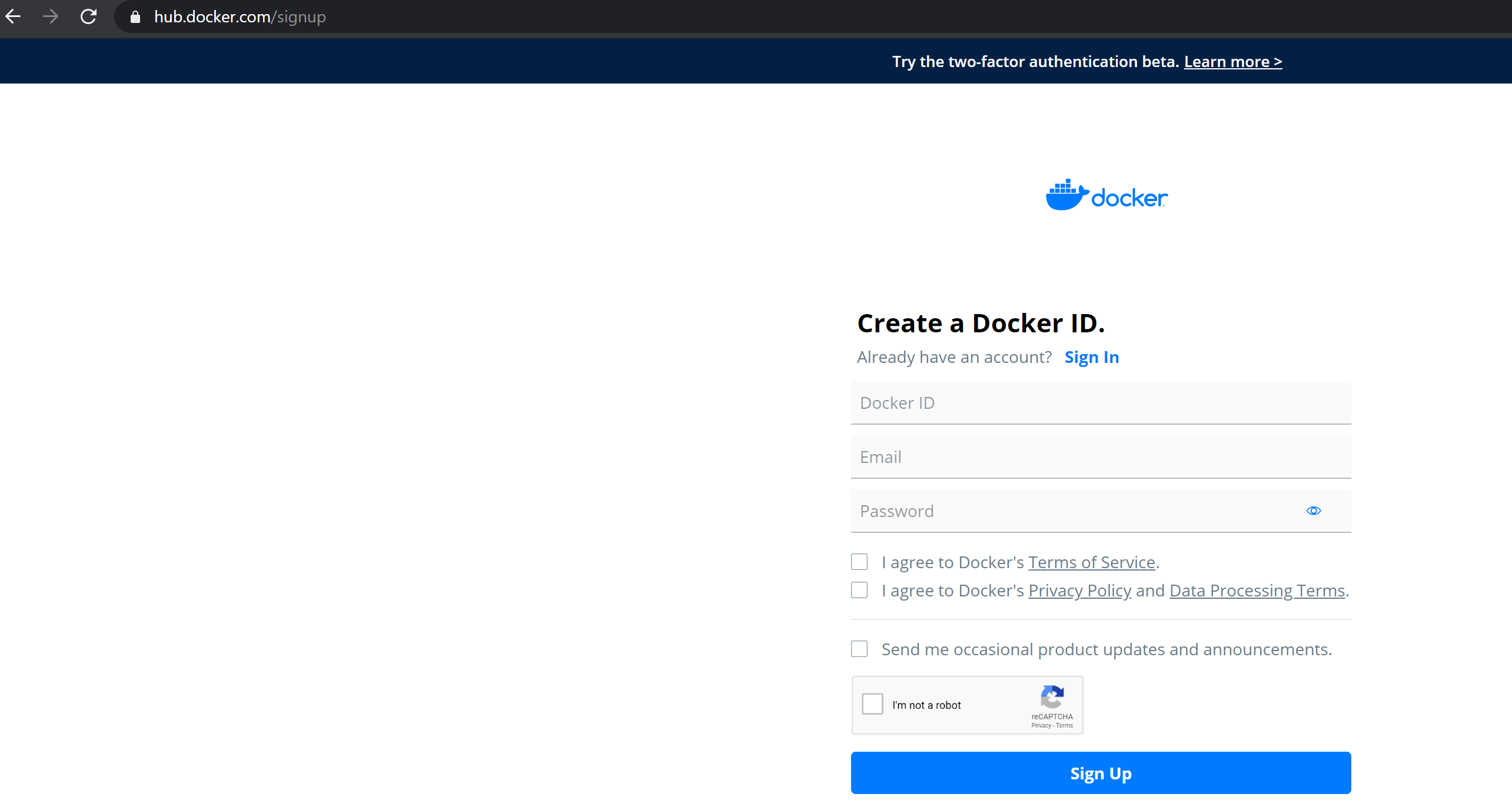 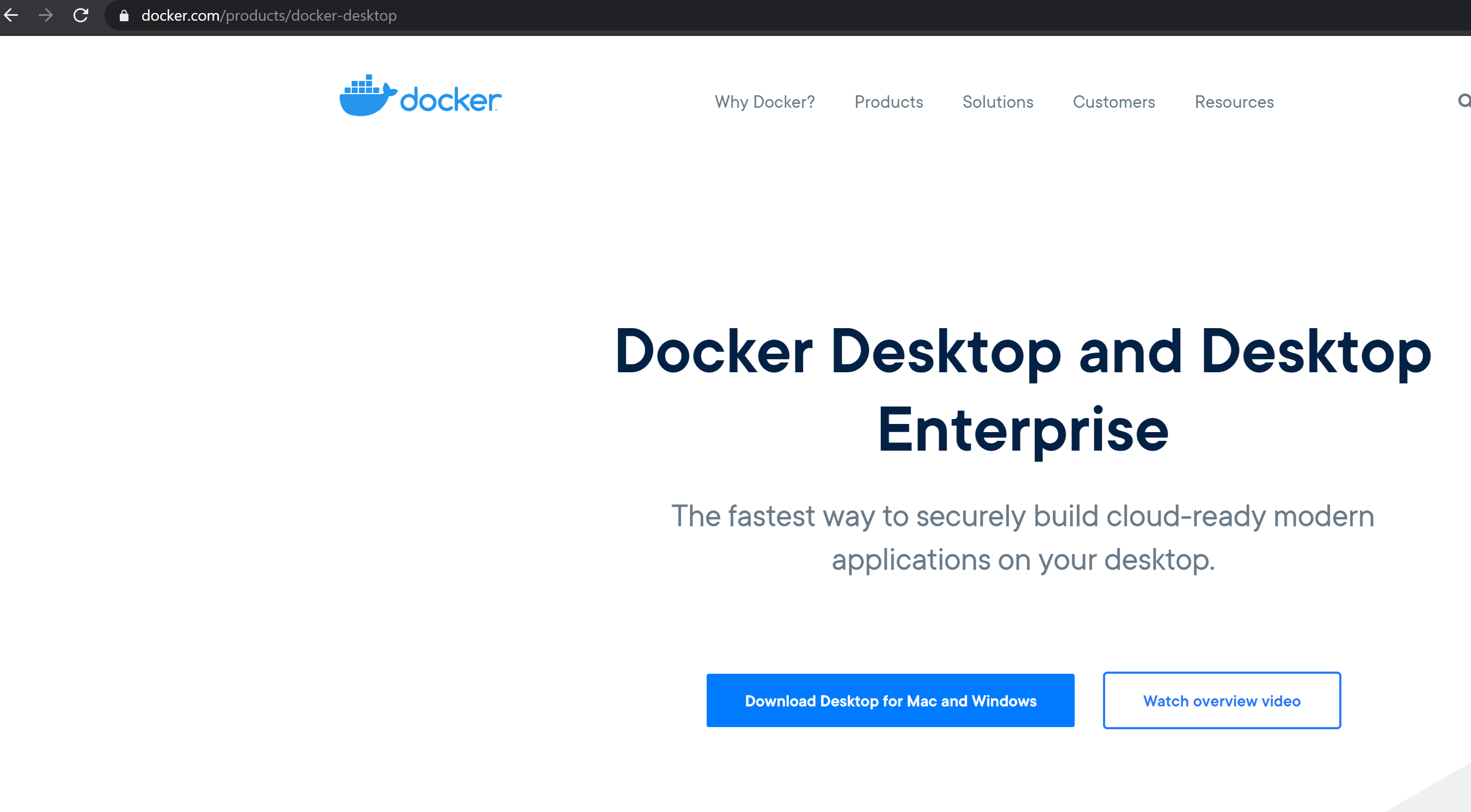 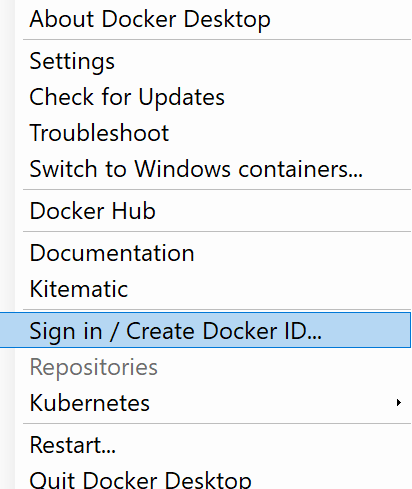 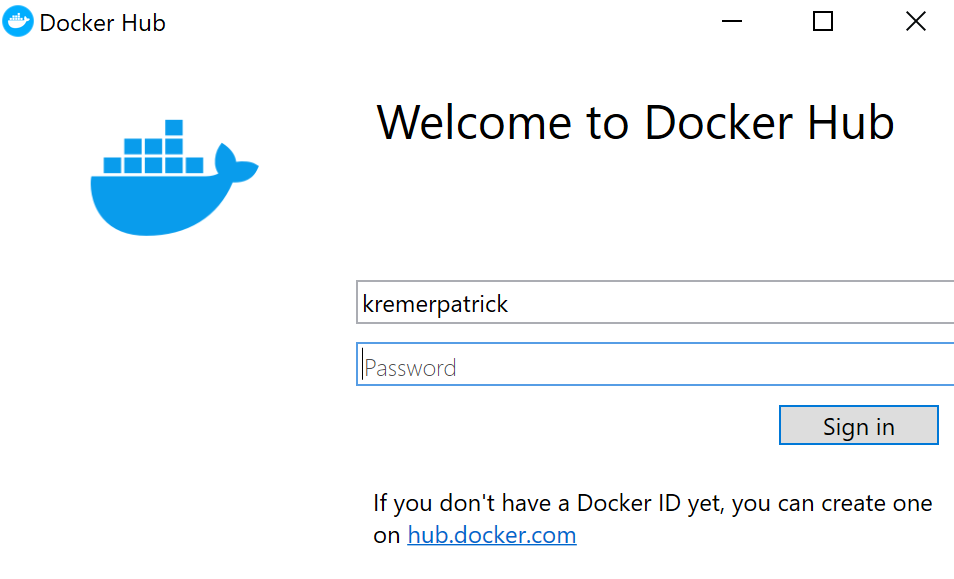 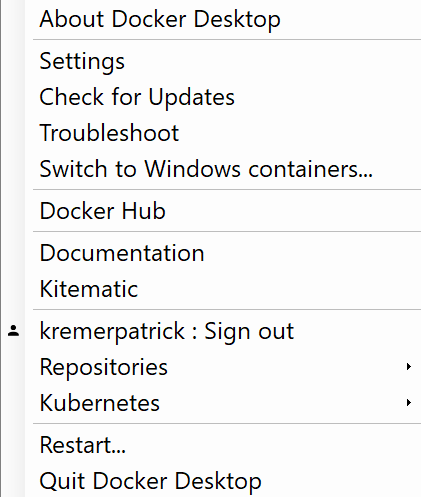 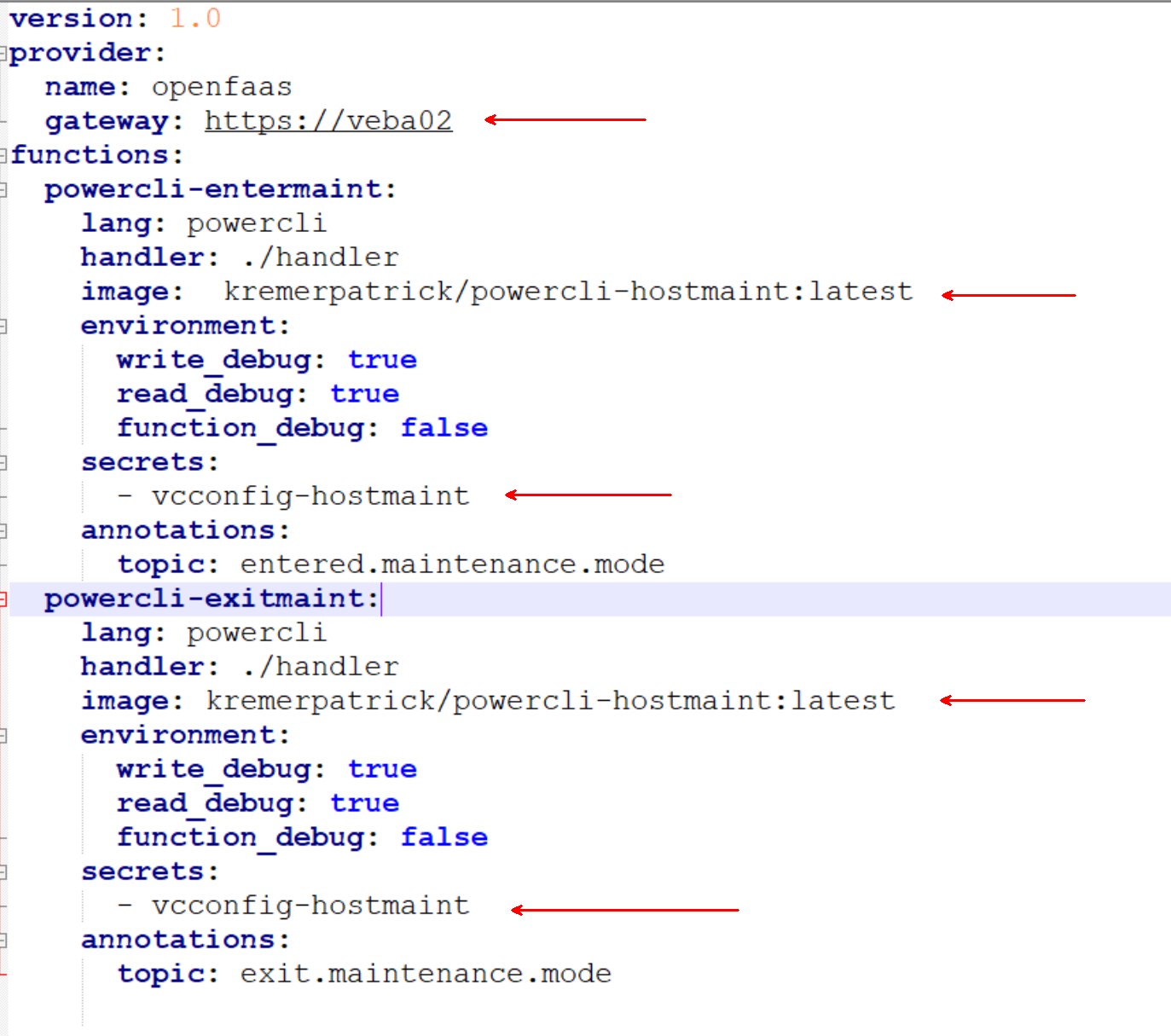 I had to move a number of clusters into a different Virtual Center and I didn’t want to have to deal with manually moving VMs into their correct folders. In my case I happened to have matching folder structures in both vCenters and I didn’t have to worry about creating an identical folder structure on the target vCenter. All I need to do was to record the current folder location and move the VM to the correct folder in the new vCenter.

I first run this script against the source cluster in the source vCenter. It generates a CSV file with the VM name and the VM folder name

Once the first script is run, I disconnect each host from the old vCenter and add it into a corresponding cluster in the new vCenter. I can now run this command aginst the new vCenter to ensure the VMs go back into their original folders.

A client needed to remove the e1000 NIC from all VMs in a PVS pool and replace it with the VMXNET3 adapter. PVS VMs are registered by MAC address – replacing the NIC means a new MAC, and PVS has to be updated to allow the VM to boot.

I needed a script to remove the old e1000 NIC, add a new VMXNET3 NIC, and register the new NIC’s MAC with PVS. I knew I would easily accomplish the VM changes with PowerCLI, but I didn’t know what options there were with Citrix. I found what I needed in MCLIPSSNapin, a PowerShell snap-in installed on all PVS servers. The snap-in gives you Powershell control over just about anything you need to do on a PVS server.

First, the PowerCLI script. We put the desktop pool into maintenance mode with all desktops shut down. It takes about 10 seconds per VM to execute this script.

Scan the logfile for any problems in the top section. The data after “Replaced MAC addresses:” is what the PVS server needs. Copy this over to the PVS host. Now we need to use MCLIPSSnapin, but first we have to register the DLL. I followed this Citrix blog for syntax:
“C:\Windows\Microsoft.NET\Framework64\v2.0.50727\installutil.exe” “C:\Program Files\Citrix\Provisioning Services Console\McliPSSnapIn.dll”

I copied the VM names and new MAC addresses to a text file vmlist.txt and put it on my PVS server, in the same folder as the following PowerShell script. It runs very quickly, it takes only a few seconds even if you are updating hundreds of VMs.

Now, replace the PVS pool’s image with one that is prepared for a VMXNET3 adapter and boot the pool. Migration complete!

I had a need to update description fields in many of my VMs and the vSphere client doesn’t exactly lend itself to being able to accomplish this quickly. I decided to use PowerCLI to dump a CSV of my VM names and description fields. I then updated the CSV and imported the new descriptions back into the VMs

First, to dump a CSV of VMs and descriptions in a particular cluster

Then, after updating the CSV with new description information, save the descriptions back into the VMs.

I referenced this in an earlier post, but we continue to have datastore alarm problems on hosts running 4.0U2 connected to a 4.1 vCenter. In some cases, the timestamp on the datastore does not update, so it’s not just the alarm having a problem but also the datastore timestamp. As a stopgap measure, we scheduled a little PowerCLI script to automatically run to ensure all of the datastores are refreshed. We then accelerated our upgrade plans to quickly eliminate the problem from our primary datacenter. We now only have it in our DR site, so it’s not critical anymore, just annoying.

We are upgrading our infrastructure to ESXi 4.1 and had an unexpected result in Development cluster where multiple VMs were suddenly disconnected after vMotion. It sounded a lot like a problem that I had seen before where a misconfiguration in the number of ports on a vSwitch prevents vMotioned VMs from being able to connect to the switch. If a vSwitch has too few available ports, the VMs that vMotion over are unable to connect to the switch. You generally avoid this with host profiles, but it’s possible a host in the Dev cluster fell out of sync. In any event, the server that was being upgraded this evening had been rebuilt and it wasn’t worth trying to figure out what the configuration might have been. I needed to go through, find all VMs that should have been connected but weren’t, and reconnect them. I decided that I needed:

Note that this script will change network settings and REBOOT VMs if you execute it. I was watching the script while it executed, I pinged the guest DNS name first to ensure the IP wasn’t already on the network, then connected the NIC, then pinged again to make sure it was back on the network. I figured I could Control-C to stop if something looked wrong. I rebooted all of the guests to avoid any failed service / failed task problems that might have occurred while the guests were disconnected.

oday, I couldn’t connect to my vCenter server using Connect-VIServer. It failed with “Could not connect using the requested protocol.”

I bypassed the proxy with this:

When you add a new datastore, vCenter initiates an automatic rescan on the ESX hosts in the cluster. This can create a so-called “rescan storm” with your hosts pounding away at the SAN. This can cause serious performance problems for the duration of the storm. Even if you don’t have enough hosts in a cluster to see a real problem, it’s pretty inconvenient to have to wait for each rescan when you’re trying to add 10 datastores.

To disable the automatic rescan, open your vSphere client.

1. Administration->vCenter Server
2. Settings->Advanced Settings
3. Look for “config.vpxd.filter.hostRescanFilter. If it’s not there, add it and set to false.

Doing this creates a new problem – you now have to manually force a rescan on every host.

Here is a PowerCLI one-liner to automate this process. It will perform the rescan on each host in the cluster, and only on one host at a time.

Here is a PowerCLI script I hacked together to list out all of our VMs by cluster.

I needed a quick list of all MAC addresses in our VMWare environment and threw together this PowerCLI script.