My homelab boots off of cheap USB sticks and has done so since 2016.

I easily upgraded my vCenter (VCSA for the win), but could not get Update Manager to upgrade my hosts, it kept throwing an ‘unable to run upgrade script’ error. I tried command-line upgrade without success, then I tried dropping the ISO image on the USB stick with Rufus, booting off the stick and having the installer overwrite the boot image with the installation. I’ve done this same process many times over the past 4 years without issue. However, it kept failing this time. The installation would progress to various percentages, but never beyond 70%

I’ve been working with VMware products since the 3.0 days and I never knew this, thank you to William Lam for his troubleshooting suggestion in VMware’s slack channels. When the progress bar of the installation screen is up, you can press Alt+F1 and get a command prompt. Then you can log in with root and no password. From there you can navigate the filesystem and tail logs, including the install log and vmkernel log. I saw lots of storage errors in the vmkernel log, timeouts and retries.

I then yanked one of the SSD drives in my Synology out and popped it into the host. vSphere 7 installed without issue. Looks like I either need to buy some high-end USB drives, or maybe use this problem to justify swapping out some of the smaller drives in the Synology with larger ones. Then I can rotate the smaller ones into service as boot drives in the hosts.

I posted today’s VMUG presentation in the VMUG section. 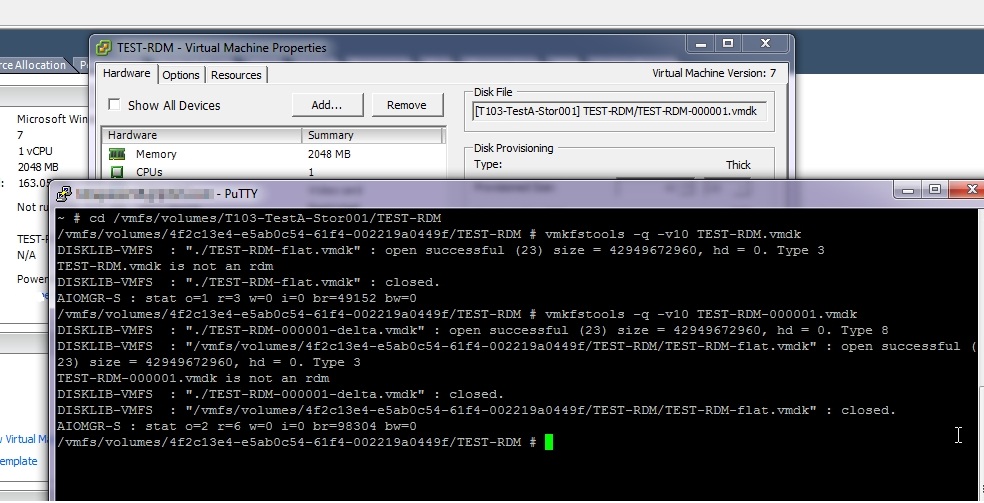 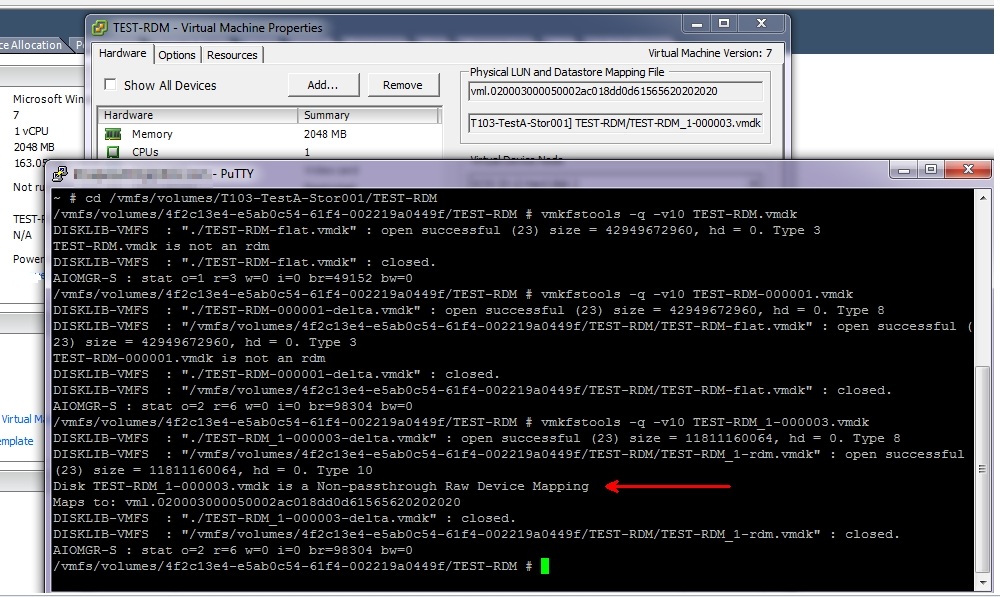 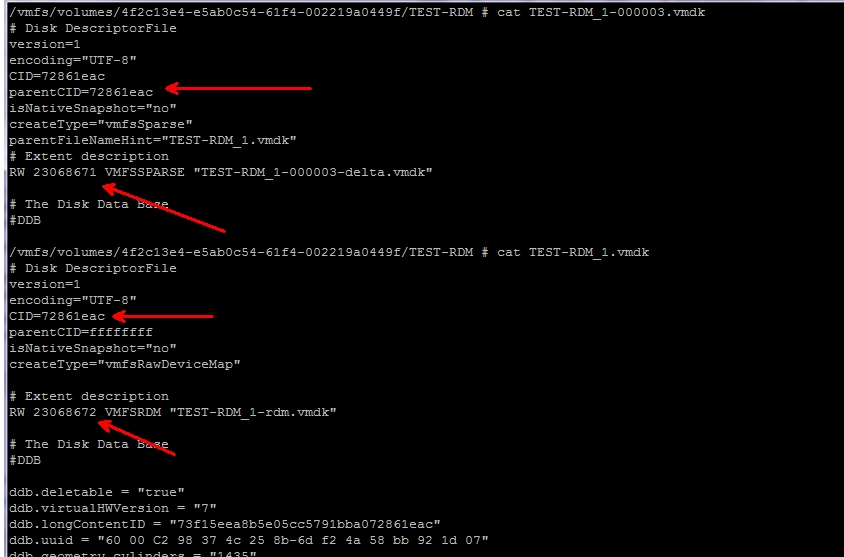 I have a large client running a Citrix XenDesktop farm on top of vSphere. The environment is using PVS to PXE boot desktops. The VM shells were created with a 2GB cache drive. However, the environment has grown and we needed to extend the drive to 3GB.

PowerShell and PowerCLI to the rescue! First, we need to extend the size of the VMDK from 2 to 3GB. The client wanted me to do this in a controlled manner, so I pointed my script to the AD OU containing computer accounts for a specific pool of desktops. I do realize I could have passed a few more of the variables as parameters.

Next, I needed a way to expand the partition for Windows. I thought about some kind of script to disconnect the VMDK, mount it to another VM and extend it that way, but it seemed too destructive. So I looked at diskpart instead. I first thought I was going to use a GPO to trigger a startup script, but apparently you can’t use those with Citrix PVS. The VM thinks it’s the identity of the master on boot – your WMI filters don’t work.

Instead, I went with remote Powershell invocation of diskpart.exe

The Invoke-Command line deserves some explanation

I create an empty variable and write the diskpart commands out to it. Then I use Out-File to save the diskpart commands to a text file in C:\windows\temp. Then I call diskpart.exe with an /S command switch, which executes the commands in the script. Because I used the -ComputerName parameter, all of my code is remotely executed on the desktop.

I referenced this in an earlier post, but we continue to have datastore alarm problems on hosts running 4.0U2 connected to a 4.1 vCenter. In some cases, the timestamp on the datastore does not update, so it’s not just the alarm having a problem but also the datastore timestamp. As a stopgap measure, we scheduled a little PowerCLI script to automatically run to ensure all of the datastores are refreshed. We then accelerated our upgrade plans to quickly eliminate the problem from our primary datacenter. We now only have it in our DR site, so it’s not critical anymore, just annoying.

We are upgrading our infrastructure to ESXi 4.1 and had an unexpected result in Development cluster where multiple VMs were suddenly disconnected after vMotion. It sounded a lot like a problem that I had seen before where a misconfiguration in the number of ports on a vSwitch prevents vMotioned VMs from being able to connect to the switch. If a vSwitch has too few available ports, the VMs that vMotion over are unable to connect to the switch. You generally avoid this with host profiles, but it’s possible a host in the Dev cluster fell out of sync. In any event, the server that was being upgraded this evening had been rebuilt and it wasn’t worth trying to figure out what the configuration might have been. I needed to go through, find all VMs that should have been connected but weren’t, and reconnect them. I decided that I needed:

Note that this script will change network settings and REBOOT VMs if you execute it. I was watching the script while it executed, I pinged the guest DNS name first to ensure the IP wasn’t already on the network, then connected the NIC, then pinged again to make sure it was back on the network. I figured I could Control-C to stop if something looked wrong. I rebooted all of the guests to avoid any failed service / failed task problems that might have occurred while the guests were disconnected.

We encountered issues that mysteriously appeared after a patching window on our vCenter server. We had just upgraded to vCenter 4.1 earlier in the month and this was the first time the server had been rebooted since the upgrade.

After reboot, the Last Updated timestamp on all datastores was stuck at the time the vCenter service came online. None of our disk space alarms worked because the datastore statistics were not being updated.

We noticed that the problem only appeared on the 4.0 U2 hosts – datastores connected to 4.1 clusters had no problem.

VMware’s official position is that workingDir is not compatible with storage vMotion.

When you add a new datastore, vCenter initiates an automatic rescan on the ESX hosts in the cluster. This can create a so-called “rescan storm” with your hosts pounding away at the SAN. This can cause serious performance problems for the duration of the storm. Even if you don’t have enough hosts in a cluster to see a real problem, it’s pretty inconvenient to have to wait for each rescan when you’re trying to add 10 datastores.

To disable the automatic rescan, open your vSphere client.

1. Administration->vCenter Server
2. Settings->Advanced Settings
3. Look for “config.vpxd.filter.hostRescanFilter. If it’s not there, add it and set to false.

Doing this creates a new problem – you now have to manually force a rescan on every host.

Here is a PowerCLI one-liner to automate this process. It will perform the rescan on each host in the cluster, and only on one host at a time.